Tusko is zoo 'Father of the Year' 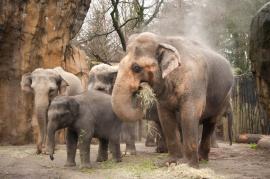 The Oregon Zoo has named Tusko the Asian elephant its 2012 Father of the Year. As his offspring, Samudra, grows up and begins to wean, Tusko has been taking on the fatherly responsibility of showing him the ropes of adult life in the herd, keepers say.

The public is invited to wish Tusko a happy Father's Day this Sunday, June 17. At 11:15 a.m., a keeper talk will discuss elephants' extraordinary intelligence, while Tusko spends some quality time with Sam and the herd.

"Social bonds are very important, especially for young animals," said elephant curator Bob Lee. "We are hoping that seeing male behavior modeled from an early age will have a positive effect on Samudra's ability to socialize with the herd as he matures."

After nearly four years of depending on his mother for milk and being nurtured by his "aunties," Samudra is getting some life lessons in what it means to be a bull. In the past year, Tusko has been teaching Samudra how male elephants, called bulls, interact with female elephants.

Tusko has also taught the youngster to respect him as the dominant male of the family grouping by, among other things, waiting to eat until after Tusko has eaten and not facing the impressive bull directly. Keepers hope that by learning to be a submissive male elephant in his youth, Samudra will mature more slowly and therefore remain with his mother and aunties for a longer time before separating from the herd, as males do in the wild.

Tusko Father of the Year

In 2008, Samudra became the first elephant born at the Oregon Zoo in 14 years, when his mother Rose-Tu was born. Adding to Tusko's credentials as Father of the Year is the fact that he will soon be a new dad again – Rose-Tu is due to give birth to another elephant in late November or December of this year.

In their natural habitat, male elephants are not permanent members of family herds. The majority of the time spent with the females is for courtship and breeding. The rest of the time, adult males live apart.

The Oregon Zoo currently manages three bull elephants and a female herd as four separated groups, moving them throughout the day to provide care, exercise and access to the outdoors as they socialize with each other. Next year, the zoo plans to begin work on a new elephant habitat, which will allow bull elephants to drift in and out of the herd as they would in the wild, minimizing keeper-made decisions about which elephants socialize together at any given time. In the expanded zoo habitat, all elephants will have a greater amount of choice in how and where they spend their days and nights.

The zoo's elephant habitat will extend around the eastern edge of the zoo campus, from south of the current habitat north into the former Elk Meadow. Elephants will have access to a variety of terrain, from rolling meadow to hilly forest. Designed for elephant comfort, health and enjoyment, the new habitat will include scratching surfaces, pools for bathing and mud wallows to cool and protect skin.

By the time Samudra is an adult, keepers hope he will be able to take the social lessons taught him by Tusko and pass them on to any future bull elephants in the new habitat.

Tusko joined the Oregon Zoo's elephant herd in 2005 on a breeding loan to create greater genetic diversity among the zoo's elephants. He has a stocky build, standing 10 feet tall at the shoulders and weighing close to 13,000 pounds –– even more than Packy. His massive trunk is nearly 7 feet long.

Despite his name, Tusko does not have the long, impressive tusks many people imagine when they think of elephants. He broke both tusks prior to coming to the Oregon Zoo and his left tusk became chronically infected late in life. In the spring of 2007, he underwent two surgeries to remove the infected tusk. Zoo veterinarians felt it was safer to remove it than to risk a chronic infection, which could lead to more serious health issues.